The budding Fairfax County chapter of the national advocacy network Mothers Out Front introduced itself to the larger community on Aug. 20 at Patrick Henry Library in Vienna by launching a Clean Buses for Kids campaign to bring electric buses to Fairfax County Public Schools.

“We felt like it was a great way to do something concrete and make a difference in our local area,” Mothers Out Front Fairfax County co-founder Bobby Monacella said. “…Fairfax can make a really big difference if we switch to electric school buses.”

Read all about it:

VIENNA, Va. (WDVM) — Mothers Out Front Fairfax, a chapter of the national climate group, wants the Fairfax County School Board to ditch its diesel fueled school buses in exchange for electric school buses; the healthier choice for the kids, and for the environment.

“We have the second-largest fleet in the country, so if we make this change it’s going to make a real impact on the entire country’s emissions,” said Bobby Monacella, co-leader of Mothers Out Front Fairfax. “It’s just important, I think, for everyone in Fairfax County to reach out to the school board and let them know that they care about this.”

Thank you to Al Markowitz for interviewing Mother Out Front Kim Williams from Virginia on the meaning of Mother's Day and what it means to be a member of Mothers Out Front!

I was invited by Virginia Organizing friends to attend the very first MOF House Party in Norfolk. I went to that party mainly to be supportive of the friends holding it. I told myself I was too busy to get involved, and that climate change was still far off and far away. Plus, I recycle and compost to do my bit for the earth, right? However, at that meeting a young woman asked me “so how has your life been impacted by sea level rise in Hampton Roads?”

NEWS: Dominion Energy touts its rate cuts instead of $1,000 rebates for SC customers

Mothers Out Front and allies are reported in the news regarding Dominion at the time of the shareholder meeting.

Activists said that the company won’t really embrace new technology until it vows to end its carbon emissions. “We have to get to net zero,” said Mary Cerulli of Boston, a member of the climate action group Mothers Out Front.

[Tiziana] Bottino shared that the UN Intergovernmental Panel on Climate Change predicts an increasing risk of extreme droughts, wildfires, floods and food shortages for hundreds of millions of people as early as 2030.  Anyone who reads the papers understands we are living this prediction. The network believes that educating the public and elected officials and influencing public policy is a good place to start.

Moms worried about the future of their kids resonated with me.

Coming together for the Richmond Public Narrative Training

The Richmond team gathered at Pocahontas State Park on Saturday, February 23 for a Public Narrative training facilitated by Kim Miller.

Storytelling is at the heart of what we Mothers Out Front do. We know that presenting the facts concerning climate change has failed to convince our elected officials to act. Stories tap into the emotions and have the potential to move decision-makers toward meaningful action. 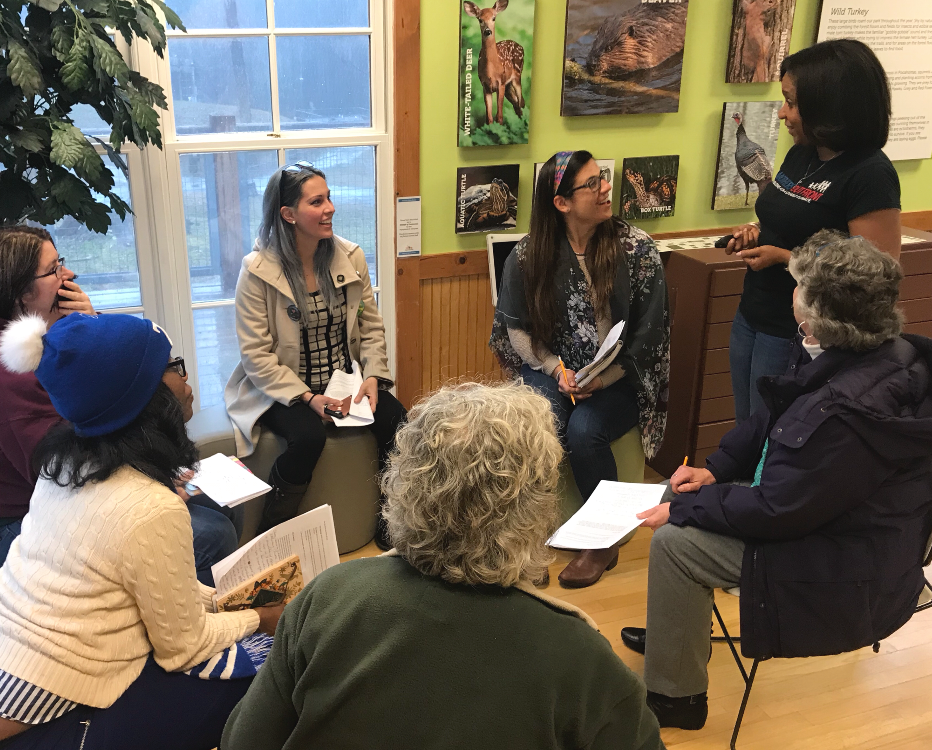 Kim Miller, standing on the right.

Posted by Kim Sudderth · January 06, 2019 3:28 PM
On Jan 3rd, 2019, two members of the Mothers Out Front Norfolk team met with State Senator Linwood Lewis. The meeting was arranged by Senator Lewis to connect with Norfolk residents to discuss his constituent's concerns before the General Assembly. 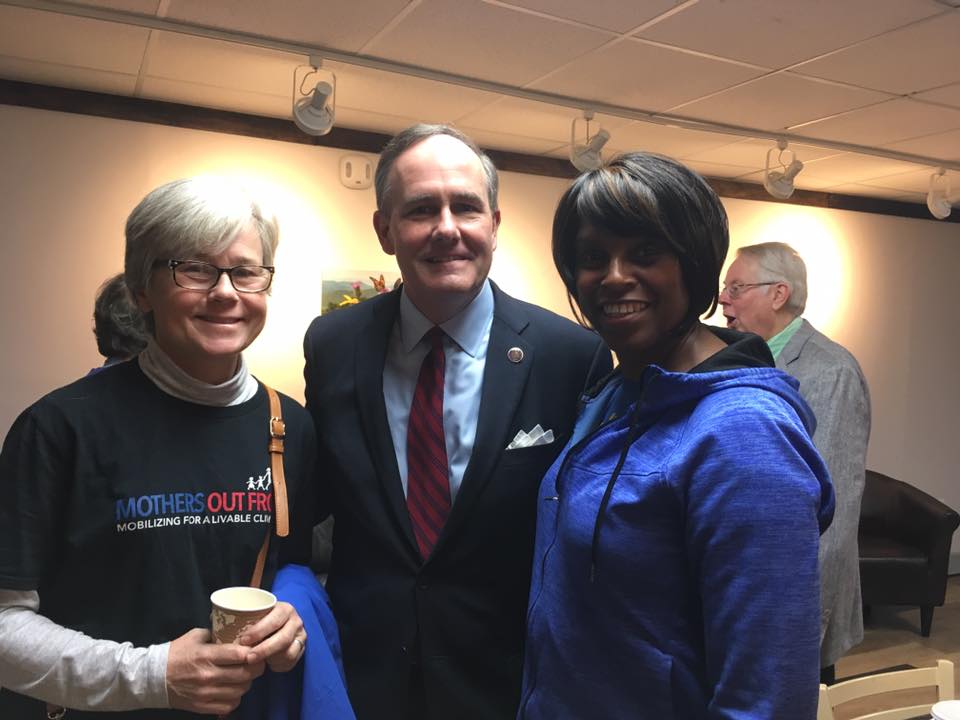 A pipeline intended to transmit natural gas from the fracked shale fields of West Virginia has been under construction in our locale this summer. The nine-mile “Southside Connector,” owned by Southern Company/Virginia Natural Gas utility, will traverse the cities of Norfolk and Chesapeake, bordering two schools in the first city and five in the second. In Norfolk, the pipeline runs along streets lined with high density apartment buildings, a theater, and churches, along predominantly low income African-American neighborhoods, until it reaches Harbor Park Stadium. There it will cross under the Elizabeth River, emerge at Colonna’s Shipyard, and run through Berkley, along residential streets, and by churches, city parks and the Boys and Girls Club. In Chesapeake, it navigates more suburban streets, still predominantly African American. In that city, it largely runs through existing Dominion Energy utility easements that are home to electric transmission lines that pass behind rows and rows of houses.

One of the biggest challenges we all face is making sure community members are aware of fossil fuel infrastructure work in their neighborhoods. Virginia activists are bringing everyone together to keep people informed.

Members of the Berkley and South Norfolk communities listened intently as panelists spoke about why two pipelines are a danger to the community. The meeting was organized by three organizations: The Chesapeake Pipeline Resistance, Mothers Out Front and The Chesapeake Climate Action Network, to bring an open and honest discussion about the Atlantic Coast Pipeline and the Southside Connector Pipeline.

"We passed the construction coming into the neighborhood," said Kim Miller with Mothers Out Front. Miller said she moved into the neighborhood recently and discovered many of her neighbors don't know what's happening. "Our streets are being diverted. People are thinking they're fixing the roads. I don't think Virginia Natural Gas was doing enough to educate their community they were putting natural gas in their backyards."

Mothers Out Front Hampton Roads in the news calling into question whether the "natural" gas being piped in is necessary!

Mothers Out Front insists that local consumers of natural gas will bear the cost of the infrastructure through raised energy bills and that African-American communities will be disproportionately affected by many negative aspects of the pipelines.