Mothers Out Front Hampton Roads is in the news! They are hosting a public house party on June 30th at 10am to invite Virginia Beach mothers to talk about climate change, local impacts and forming a team to take action. The article linked below was published June 25th in the local online news Southside Daily!

You can RSVP to the event by clicking here!

With gratitude to Rev. Leo Woodberry:

"Our elected officials must listen to climate scientists. They must put the interests of real people ahead of the interests of corporations. And they must be honest about counting all the costs — including pollution and climate degradation, and human health costs — when considering dirty energy sources that damage our land, air, water, climate, communities and health....

That’s the vision that brought the Justice First Tour to Portsmouth, where this past weekend we met with justice activists from groups including the Center for Sustainable Communities, Mothers Out Front, Portsmouth’s Cavalier Manor Civic League, Virginia Interfaith Power and Light, and ECO District Hampton Roads. We heard about important issues, from Virginia’s Carbon Reduction Plan to increased flooding in Hampton Roads neighborhoods to energy equity and 100 percent clean energy for all."

Norfolk, Virginia faces the consequences of sea level rise regularly and the residents of Tidewater Gardens, among the most flood-prone areas in a city with one of the fastest rates of sea level rise in the country, are facing relocation. Click the link below to find out more.

“Water stood wheels-deep in a nearby intersection. In heavy rain, she said, both the road and the path flood, and children find another way to school. Or, they simply stay home. 'Flooding, rain, just to hear those words, for parents it puts a heavy burden on them,’ she said.”

The First Ever Mother's Advocacy Tea in Hampton Roads

The first ever Mother’s Advocacy Tea, a civic open house for all members of the Hampton Roads community to attend to learn how moms are leading the way for civic change and community engagement, was held on Saturday, May 12th.  Attendees visited tables staffed by local volunteers from local non-profit, non-partisan organizations to learn how they can get involved and add their unique talents and voices to organizations that share their personal values. 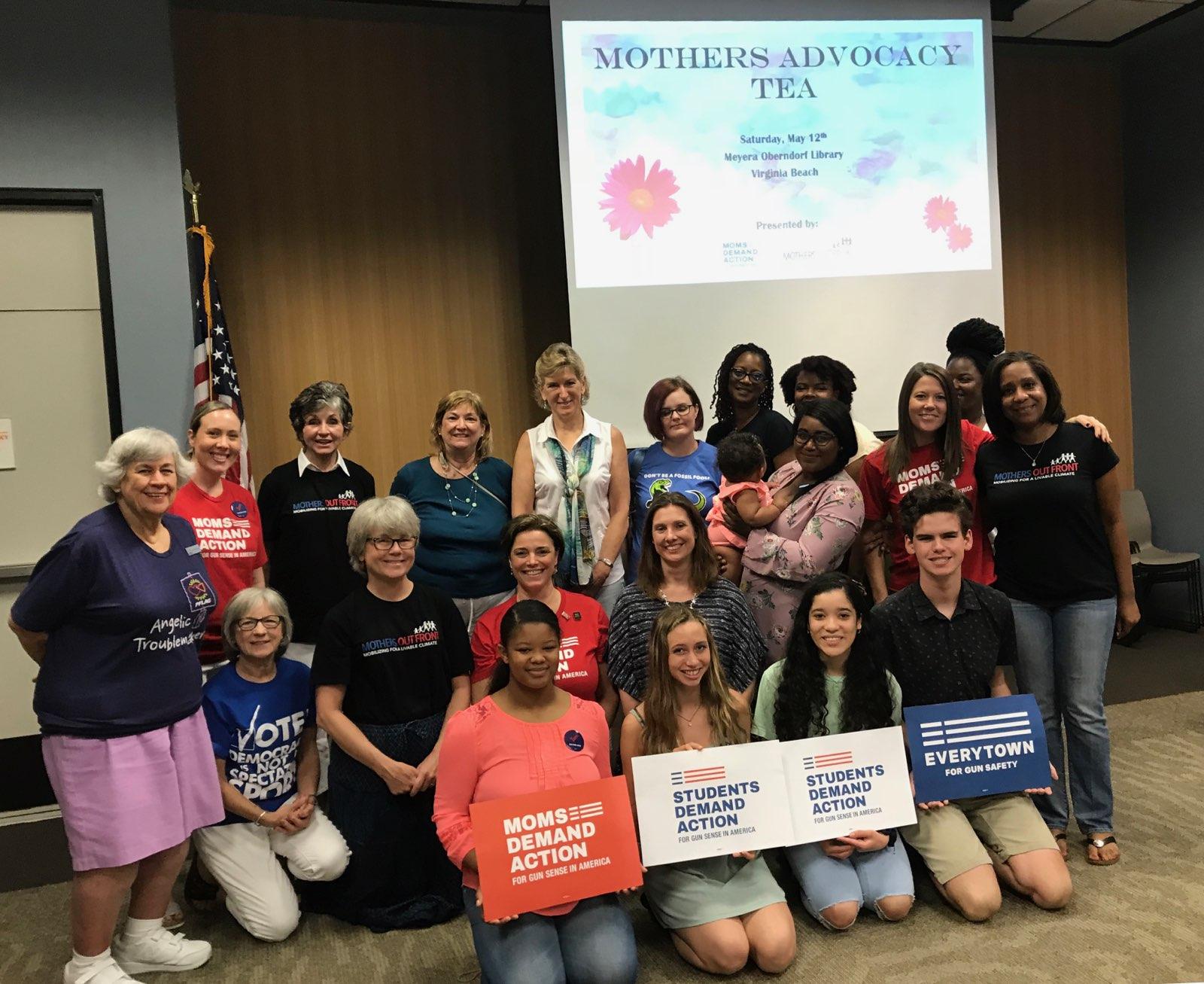 Norfolk Team Testifies to the Dept. of Environmental Quality

Several members of Mothers Out Front spoke out last week at the Virginia Dept. of Environmental Quality Public Hearing to support Executive Directive 11 - to reduce and cap carbon emissions - and in support of bringing Virginia into the Regional Greenhouse Gas Initiative (RGGI).

We asked the DEQ to help draw down climate change by encouraging a reduction in carbon emissions but also asked that they consider lowering the cap as far as possible.

VIDEO: Watch Kim Miller testifying at the hearing on Facebook! 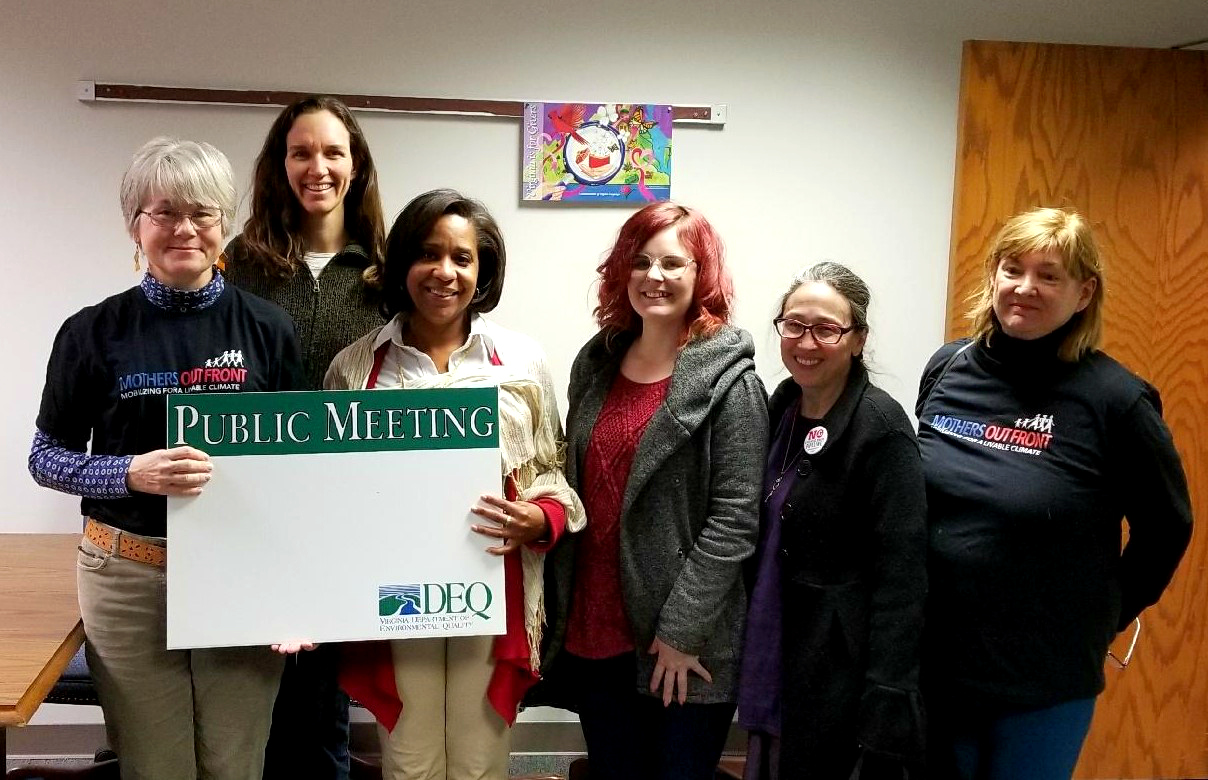 Read the Letter to the Editor by Mother Out Front Kim Williams, Hampton Roads!

Kelsey Wirth and Kim Williams in Washington DC for the Women's March, January 2017

"MOTHERS KNOW THAT their children’s needs come first. But does the current administration agree? Based on their terrible decision to repeal the lifesaving Clean Power Plan, I fear not. I am afraid that its mission isn’t for a livable climate for our children. Its mission is to make more profits for the polluters."

Hampton Roads/Norfolk Team in the news!

Two members of the Norfolk/Hampton Roads Team, Team Leader Kim Williams and Theresa "Nia" Amoruso were interviewed and featured in a recent article in the local news site Southside Daily. They are speaking out against the proposed pipeline that will plow through parts of Suffolk. This pipeline threatens parks and water reservoirs along the proposed path.

“An active member of Mothers Out Front – an organization that exists in part to “influence decision-makers to make a swift and just transition from fossil fuels to clean, renewable energy” – [Theresa] Amoruso spoke quickly, even after the three-minute buzzer that alerted her time was up.

‘The city of Norfolk and other regulators agree that boring pipelines under our priceless reservoirs cannot be assessed as completely safe, only as low-risk,’ Amoruso said, citing language used by the Federal Energy Regulatory Commission pipeline project assessment. ‘Why is any level of risk acceptable to our priceless water supply?’”

The Mothers Out Front Hampton Roads Team is working to increase awareness about fossil fuel infrastructure proposals in their communities:

Mothers Out Front spoke with our Norfolk neighbors about the dangers of the Virginia Natural Gas Southside Connector Distribution Line (pipeline), and its role as a potential feeder line of the fiercely opposed, proposed Atlantic Coast Pipeline. We began tagging the line, and will continue to do so along with impacted neighbors, and others concerned about the environmental perils of this and the other proposed fracked gas pipelines. To find out more about this campaign, and to join our efforts, please follow this link: http://va.mothersoutfront.org/pipelines"

Coastal Voices Part 8: The Key is Prevention by Oceana

"It was at a house party last year that Kim Miller learned more about the nonprofit Mothers Out Front and its members.

It was 'kind of like Tupperware parties, but instead of containers, it’s climate change we talk about,' she said. Soon after that party, she became an organizer for the group."

Mothers Out Front Hampton Roads came out to support the August 16th rally to resist a natural gas pipeline in the Georgetown neighborhood of Chesapeake, helping to spread the word about the threat to our families' and communities health from fossil fuel infrastructure.